With the loss of three of our sanctuary jacks, Simon, then Merlin and now Milo, we thought we’d introduce our supporters and adopters to the jacks we call the sanctuary dogs. Currently living out their lives as family members in the JG household, Simon, who crossed the bridge the week of April 20, was one of 24 Jack Russell terriers living together. With the loss on April 27 of Merlin, another senior statesman, and then quite suddenly our dear 7 year old Milo on Sunday the 3rd of May, JG’s numbers have dropped to 21.

These dogs, most now over the age of 12, have come to us as dogs with medical problems, aggression problems, or just downright being old and abandoned, too feeble to be adopted out to a new family or just too cranky to be safely settled into a new home. Jacks Galore has always tried their best to take in as many jacks as people request assistance with, and usually we hope to adopt them out and keep them only a short time in the kennels where the adoptable dogs spend their time waiting for their family. Those dogs we do take in and are deemed unadoptable, or those that people beg us to save before their life ends on a cold shelter floor or when our hearts overrule our heads, we try to ease them into our family pack to allow them to live out their lives with us. We have never upset the balance with this number of dogs as everyone gets along; we make sure of that because in a large extended family it’s the top priority that there’s never issues between the various characters living together. 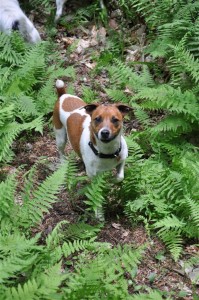 The JG sanctuary dogs have wonderful free reign with dog doors and 6 fenced-in acres of fields and woods for their enjoyment to peruse during the day. At night when we close the outer fence so there’s only a small area for them to venture out at night, those that are incontinent or need to wander can still venture outside and do their business without worries or fears that one of the wild critters outside of the fence line will spike their interest.

Among the sanctuary dogs is 7 year old beagle hound mix Yankee, who came to us with his bonded jack pal Sparky who is now 14 and has muscular wasting disease. Another non-Jack is Zoe, a Chihuahua who met up with a jack before she was spayed and at 16 needed a home with her jack mix son Hopper age 12. It seems the JG family has always had a Chihuahua, a Beagle and then the jacks. So it only seems fitting that these two non-jacks became part of the extended family. So who lives in our house? Zoe the Chihuahua at 16; Jakey, a jack with Cushings abandoned with 5 of his siblings at 15; Lux, discarded when a baby joined the family and yet another dog with muscular wasting disease at 14; Teddy, who came to us from the South at 14; Sparky at 14 who came with the Beagle and has major medical problems; KC, one of our original adopted Jacks who was unadoptable from another rescue and now 13.  There’s Jersey at 13 who came from one of our vet’s clients when his owner had a baby; Gabby at 13 who came with Simon and has spinal degeneration; Hopper, the Chi’s son at 12; Leo and Libra who came in together as a pair when their mom moved to Africa and both being 12 did not want to be separated. There’s Mac at 11, an original JG jack adopted into several homes but whose latest adopters had a family tragedy and this dog has major neurosis. There’s Moma, our Chihuahua/Jack mix, who at 10 supposedly never could be housetrained and after six months of proving herself clean just stayed because she was JG mom’s crazy girl. Otis at 10 into rescue as a perfectly adoptable dog but having been a stray for so long he lost all his hair from major flea infestations,  forever to be a bare dog.  All potential adopters could not see past his looks and rejected him. We call him our piggy and adore him. Then there’s Louie who came from Ohio at 12, given up twice because of incontinence and about to lose his life, but Louie has settled in well and is here to stay. Bodie and Spunky, two of our original Jacks at 10 and 9 respectively; and Buddy, who has some “interaction” issues so at 8 has settled in with the pack within his own balance. There’s Jack, who at 7 came to us when a dear friend died and we promised to take him in if anything should come to pass.  A large Lab-Jack mix, he towers over the clan.  And lastly in the house is Foster at 6, left at a vet, hated all people and had no social skills, with fears and idiosyncrasies that boggle the mind. 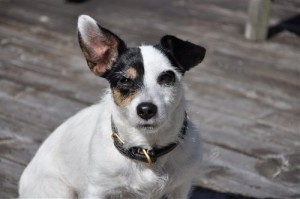 Two jacks still part of the sanctuary family are Pogo, 13 and Rocky who at 12 are the kennel lifers.  Dog-aggressive and elderly, they are happy in their lifestyle and round out the permanent members being cared for until they too shall follow the jacks we lost this year; Roy, Fitzie, Simon, Merlin and Milo across the bridge when the time comes. 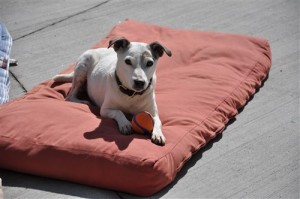 Taking care of such a large number of kennel (usually 12 adoptable dogs at a time) and in-house dogs requires an enormous amount of time and money. Vet visits alone take up a good part of donations spent, but food and medication certainly add up every month. This is why rescue costs money, it’s making sure that as many abandoned Jacks as possible can be saved, and those that have reached years beyond anyone’s interest are still shown the kindness and love every dog deserves in his senior years. JG mom always wonders what would happen if we as humans would say to our own seniors, “Now that you’re in diapers we no longer have the time or interest to care for you”? What kind of society does that leave us with? We feel deep dedication to these 21 critters that circle our legs, that sleep in our bed, that have accidents in the house, that require midnight calls to the emergency vet, whose diets constantly need changing or chicken and rice cooked for them when their tummies are upset, who make us sleep on the floor with them when their last days require closeness, when they need to be carried out in the dead of winter to be helped to do their business, when we live at the vets doing dentals and blood work, when they go blind, when their mind fails them, when they just need a pat, and when their time has come to end and they need to be held in your arms as they take their last breath.

This is also part of rescue, it’s not just the happy adopted dog stories, the families who gain a forever jack in their midst and the days full of joy and glee, it’s also the seniors who need our attention, the dogs whose health has failed them and been cast away, the mentally troubled jack who needs that proper balance of support and understanding, and those who just need a home. All of this is only possible because of you, because supporters and adopters understand what it means to take in a dog in need. 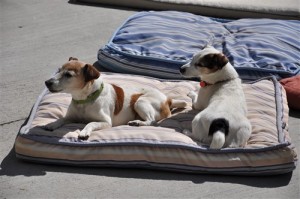 Many of them are adoptable, but many are not. So we try to balance rescue between those that come and go and those that need to stay with us permanently. We cannot go above the number we currently have in our care, as the balance is now stable and the dogs require us to be there for them to make sure we take time to make their lives fulfilled. Now that you’ve met our sanctuary Jacks, we hope you’ll continue to be part of our rescue, part of the extended JG family, and will understand when we say we’re busy! 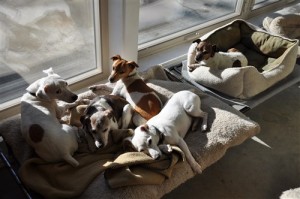