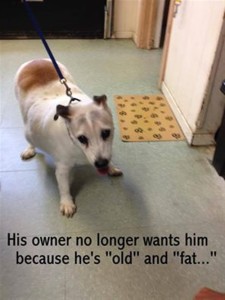 The FB posting that drew us in

Tony update – Thursday, September 17, Tony was put to sleep in our arms.  After rapid deterioration of his health in the last days, a sonogram was preformed and it was found that he had liver cancer.  Tony was in much discomfort.  Upon speaking with his adoptive mom and with the support and advice of our vet, we made the decision to let Tony cross the bridge.  Tony is now at peace, and he was immensely loved his last days and hours.  RIP, you have now known true love.

Tony has a story to tell: a tale of neglect, abuse, followed by a small flicker of light, but one that went out after five years when he was given up from his second home as well. Tony is a 14-year-old male Jack Russell weighing in at 32 pounds, 20 of which is excess fat. We can only assume at one point in his life he was brown and white with a lovely circle on his back and markings on a very gray muzzle. Tony’s “tail” is why rescue is vital; it’s why Jacks Galore is in the “business” of saving jacks.

Tony’s first home bought him as a puppy, the man of the house wanted a Jack; but Tony’s life consisted of being chained in the garage, and according to the girl who gave him up, they just threw him food like pizza in the garage to eat. So Tony sat and rotted, he was fed lots of Italian food and ate it all, and now has a penchant for tomatoes. He never saw a vet, his nails never trimmed, never went out to see the light of day, or to go on walks, or learn to play ball, and he did not know what the warmth of a soft bed and lap could mean. Then the owner got old, and even though he would occasionally spend time sitting with Tony in the garage, he died.  When the family went on vacation the youngest member of the family needed him to go somewhere to stay, so she asked a coworker if they would help out.  This family, who already had three dogs, decided to go ahead and watch him. They were disturbed by the fact that he was living in the garage and never was let out. When Tony’s family came back from vacation the dog sitter said she thought he should not live in a garage, and since the original owner no longer wanted him, they kept him.

For five years Tony was taken care of, he was fed dog food and he did appear to drop some weight. The story is the Tony’s tummy was literally dragging on the ground so that he could not move at all. But Tony’s weight only dropped by a bit, and so he needed to be carried up and down the stairs and the owner could no longer physically do that and he was, as a consequence, making a mess in the house – where was he to go?  So Tony was brought to the local shelter and the shelter manager said she was not going to take an old Jack to be in the kennels, but that she would inquire and ask people to find him a home.

Several Facebook pages had Tony floating over the Internet, and when we were asked for the umpteenth time to please step in, JG decided to look to see if we could find a home and make room for him. We knew there would be a time of healing, that the vet expenses could mount, but also that there was a chance he would not make it.  Luck prevailed, and when we secured him a loving forever home we took the chance to see him through the process of becoming a jack once again; if Tony was willing to give it a try.

Heavy, but now knows he is loved

Tony made the long journey from Long Island to Western Massachusetts by way of our wonderful volunteers and adopters, and when JG brought him home we were just appalled at what was a much worse condition than we were made aware of. Immediately Tony went to the vet, where he was diagnosed to be quite healthy except for his excessive weight. His blood work came back normal except for some liver values that were higher than they should be, but nothing of grave concern to our vet and something that could be rectified once he loses some weight. Thyroid testing went out but that result will have to wait for another week. No diabetes, no cancer, the typical old age lipomas; the only grave concern to all of us was his horrible stinky mouth and rotting teeth. Tony was given his shots because he had never been to a vet, and was a gentleman when his blood was drawn. Thank goodness he was heartworm and Lyme negative; but of course that’s not hard to be if you’re never outside.

Tony now gets to go to doggie spa, so a visit Camp Wagalot’s wonderful groomer to be pampered and cleaned and get rid of all of those urine stains.  Not only will he smell sweet again, but they will rejuvenate his skin so that he feels comfortable once again. Then he’ll have a dental, there’s always that chance that he might not make it through, but we all agreed that his chances were good and that it would do wonders for his health to have a mouth that was not infected.

After a few days of recovery, Tony will head north, to upstate NY on Sunday, September 20, to join two other aged jacks, and his forever home.  His mom will nurse him back to his normal weight, and show him that love is something he deserves. Tony has followed a path of turmoil and troubles; he has spent many years, sadly like so many other neglected, abused and forgotten dogs, wanting more, dead as much as he was alive.  We hope after all his vetting and care here at Jacks Galore, that Tony’s “tail” has the happy ending we are aiming for. 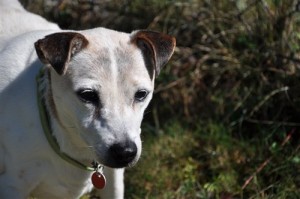 A new life ahead

Tony has a forever family waiting with open arms and caring hearts to guide him through his final senior years and as Jeanine puts it  “for however long or short he chooses to stay with us”. Amen to that!

Rescue is a constant climb up the ladder of hope, but every rung we are able to reach has its own little glimmers of joy.  Tony you are and will be loved again.