Chaplin is the newest member of the Jacks Galore sanctuary, 13 ½ years of age and deaf since birth; not the oldest, but certainly not the youngest either. Family medical issues, no one to take him in, a plea to find him a forever home because he’s still a “great healthy little dog” was the word we got. 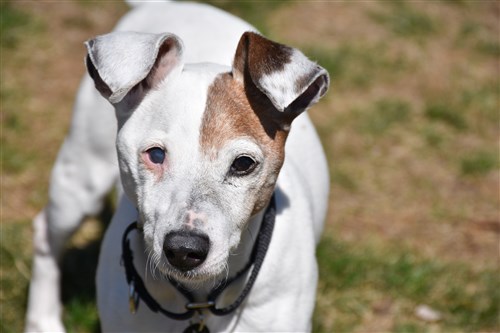 Still as spry as ever

We can no longer count how many times our rescue gets these requests; emails, phone calls and pleas to help an old dog either being surrendered by an individual, or a shelter reaching out before the dog is euthanized. Too often it seems, and more and more in the last few years we find that the seniors seem to be in need. Jacks Galore tries to step in whenever possible, in hopes that maybe someone out there will fall in love with an older jack in need and give it a few weeks, months or even years in a home and family setting. But if that’s not possible, and we have no other options for the dog, then we hope and pray that they will fit into sanctuary with all the other jacks living out their life with us, and will be able to assimilate in a pack of many many JRTs.

The last thing we want is for a senior dog to spend the rest of its life in the kennels. Not that it’s not a pretty good place to stay as a temporary way station, but it’s certainly not a forever family with all the creature comforts of home; sofa to sleep on, a lap to curl up in, and always someone there every minute of the day. So many of the older dogs have passed through our sanctuary gates; many have given us one or two years, and some have only given us a few days or a couple of weeks. Everyone has been adored, received the best medical care we could provide, and learned that love was not something they lost when they came to the rescue.

So Chaplin has settled in well, he has learned the dog doors quickly, he has found his designated crate for mealtime, he has learned that there are many places to stretch out his old weary bones, and he stands patiently when his eye drops need to be administered into his one good eye, and in his other blind damaged eye. This little boy had a dental with teeth pulled which proved to ease his pain, and he handled the anesthesia like a pup. He has tons of energy, loves to run and challenge the other dogs, but most of all he loves to curl up and sleep soundly.

We have no idea how many years he will give us; but if by chance someone would step up and want to adopt him then we would hope that he would go and live a happy life with his own new family. But in the meantime, like our other sanctuary jacks, Chaplin will enjoy every day that we can give him and we will make sure when the time comes that we will hold him in our arms and let him pass peacefully to join all the other jacks that have gone before.

Please remember that sometimes adopting a senior is not only the most satisfying addition to a family, but certainly a very special gift for a dog that has been given up so late in life. 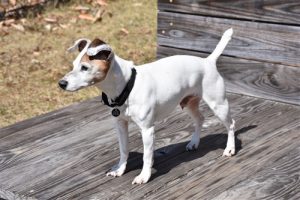