Rescue offers so much joy and feeling of accomplishment that it’s always a wonderful field to be part of; volunteering at your local shelter, helping raise funds for a rescue you know, collecting dog food or bedding for a dog group that needs it, or working closely with someone who does it full time. At Jacks Galore we do rescue full time, and I can only say there’s much joy in saving these little souls, seeing them head off to their forever homes with a wagging tail and the sparkle in their eyes, and hearing of their antics with follow-ups in their new home.

Rescue can be frustrating too, having to decide who comes in to be saved, who is able to be moved on elsewhere to find a new life, or who you have to turn away for reasons that can be tough to reconcile. But here at JG we find that despite the joy, the moments of laughter and extreme happiness there is a dark side that we like to push away and forget about. The month of August has brought us extreme sadness, because we are powerless to change the outcome of a little life that should’ve been a long one. 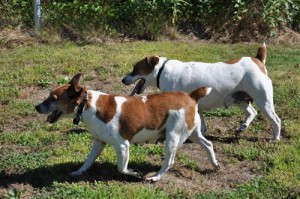 freedom ride, one step closer to having a forever family

The frustration we often feel with puppy mills or backyard breeders who breed for money is powerful, but when the proper actions are not taken to ensure the health of the jacks, or any dog for that matter, it makes it doubly worrisome. Jacks Galore rescued two female breeder dogs that were no longer of use and slated to be killed or, as the breeder put it, “we could have them for free”. We were contacted by a woman who heard of a breeder near her who was going to kill two females because they had outlived their usefulness. At only ages 5 and 8, perhaps they were no longer able to produce the litter size required to make enough money but they certainly are still able to have a long and happy life as someone’s Jack.

Jacks Galore agreed to step in and take these two lovely little girls; kind, gentle, so perhaps they were at least treated with some humanity to have such dear characters.  When a date was made to pick them up the breeder said he had a puppy he was going to put to sleep because it had wobbly back legs. The volunteer who went to get them asked us to include the puppy and see what we could do. So three Jack Russells came into our care after two wonderful volunteer supporters traveled to meet us, and right away we knew at first sight this puppy’s life was not to be. 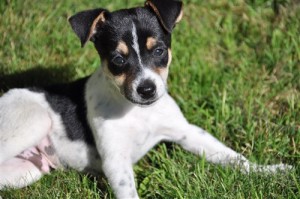 Willie Wonka some time in the sun

Willie Wonka, as he’d been duly named, had severe neurological disorders and no motor skills. As our vet said, an extreme case of damage to the brain for a multitude of possible reasons; in the womb something went very wrong.  So sadly, only two days after his arrival he crossed the bridge to join the jacks who have gone ahead of him. But the good part is we were still able to put joy in his life before we had to do the ultimate: to love him, shower him with kisses, let him bite our fingers and pull our hair, snuggle in our armpits, and roll in the grass warmed by the summer sun and have his name called with enthusiasm.

So even in the darkest moments of rescue we are able to find a small ray of light, Willie WAS loved and crossed over the bridge in our arms. The joys of rescue followed by times of sadness; this is why we ask you to support our mission. Because without the adoptions, the happy news emails, the stories of dogs rescued elsewhere, notes from all of you who love your jacks and just knowing that you all understand, that’s what makes it possible for us to make the difficult decisions too. We will rejoice in the gleefulness that Willy Wonka gave us for the short time he graced us with his presence. 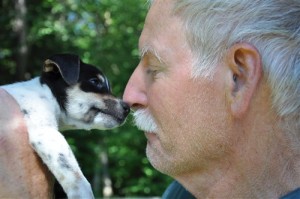 A whole lot of lovin’