ADOPTED!!!!  Off to VT Roger, now named Freud, went.  With a rescue jack gal pal, and a great family to adore him as he so missed when he was left at the shelter.  He gets home cooked meals, places to relax in the large fenced yard at the farm and the cottage, but best of all he likes to sleep on the comfy sofa and in the bed at night.  A possible future treck to OR might be in the distant future, but he does not mind as he knows his new fur parents will love him forever more.  Glad you landed so pretty Freud, deserving of the life he was so longing for.

Roger is the most delightfully handsome 5 year old rough coat imaginable.  A 17 pound perfect sized brown and white jack, he just simply is irresistible.  Coming to us from a shelter where he had been overlooked and then pulled by a volunteer when his time was up, Roger is destined to be a great canine partner. 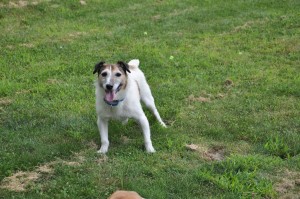 Ready for the toss 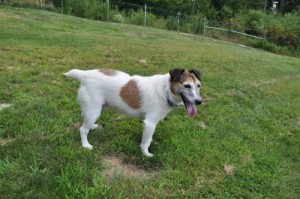 He gets along with all dogs, seems not to mind cats, and is affable in many ways.  Roger enjoys long walks nicely loping by your side, with of course the occasional dart to a stone wall to check out the peeps from within, and relishes the miles walked with his human.  Roger also enjoys a good game of ball throws and will look for some affection between tosses.

A quiet jack, he does like to play and has met one or two JG pals that meet his style.  Roger loves humans; he not seen one he hasn’t greeted with a tail wag and a smile.  He is housetrained, although a refresher after kennel life is always a necessity with any rescue jack.  He likes the toys he is given and can lay peacefully in the sun for hours taking in his surroundings.  Roger rides very well in a car, and is crate trained but there is no need for its use!!  Roger would make an amazing jack friend.

Jacks Galore is not sure why such a delightful fellow would find his way into the shelter system, but then it doesn’t matter because Roger is now ready for you to take him home to that sunny side of the street. 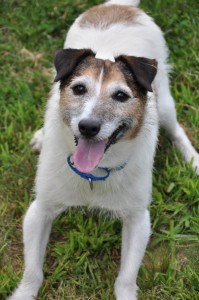 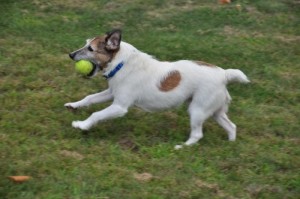