Pulled by a volunteer at a shelter just before euthanasia, Perry is a 7 year old jack with a smooth coat of silk and the eyes the color of chestnuts, who must at some point in his life been loved and then ended up in the clink when hard times prevented his owners from providing him proper vet care. A bum leg from a car strike and a tumor on his penis, Perry’s chances for adoption from the shelter he landed in were slim so he was put on that dreaded list. Spotted by a volunteer, an APB went out to a group of us who decided we would all pitch in to save his life. 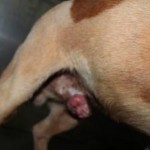 The volunteer Jennifer got him and brought him home despite her limited space; but we all know that drill, and began the quest to collect money for his tumor surgery and to find someone to step up for this handsome boy. Perry, the quite perfect jack whose life had run out of luck – quiet, clean, smart and very demure – stayed at her house for several days until enough people stepped in to pay for the next step on his road to recovery. Then off to the vet. Jacks Galore was in all the way and we pooled with several other like-minded souls to have his tumor removed by a local vet wiling to give us a break on the cost. The surgery proved successful and a nasty cancerous tumor was removed. 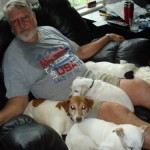 Perry with pals at his foster’s

Then a long-time jack foster stepped up, adding to her existing loving jack family of oldies, and Perry soon became a favorite guest who lounged in dad’s dog chair during recovery after surgery. With him safe in Deborah and her husband’s family, we then set about finding someone to adopt him before we contemplated the second critical step: to fix his very bad rear leg, atrophied and hanging useless by his side. 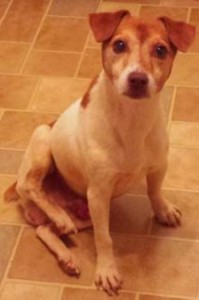 As luck whould have it, we were able to find Perry a forever home of a lifetime in CT, a family that wanted to offer a dog in need that special place where he could recover with much attention, patience and love.

So Perry’s journey began to Jacks Galore for the next phase of his life: surgery we would cover and a forever home in the wings. He arrived already nicely healed from his first tumor surgery and was prepared for a thorough exam to repair his leg. A lousy first set of x-rays revealed nothing, but Dr. Reiners took a set of clear digital x-rays which showed a mess. Perry had two plates in his rear leg, lots of wire, and many more screws than seemed necessary, adding to the discomfort he must have already been feeling. Dr. Reiners from our South Street vet set about explaining to me our options and various possible outcomes. Together we decided it was worth the plunge (well, what ended up a couple of plunges), and what a ride it was. Once again, thank goodness for competent vets, make sure you have one!!!!!  To be continued…….