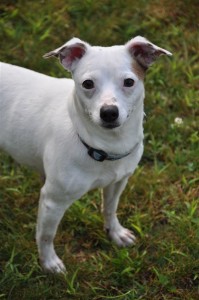 ADOPTED!!! Petey and Darla BOTH went to their forever homes on the same day – one to the Cape in MA and the other to NH (and Florida!!).  Both will be active, well loved and safe forever more.  And best of all their first fur dad knows they are safe and well.

Peety, a three-year-old 17-pound black and white long-tailed male, came in with his roommate Darla, a 17-pound, three-year-old brown and white female. Adorable, energetic, playful, muscular and very affectionate, these two came to us from terribly sad circumstances. We were alerted by a shelter when three little Jack Russells came into their care after a tragic incident involving their dad who went into hospice. 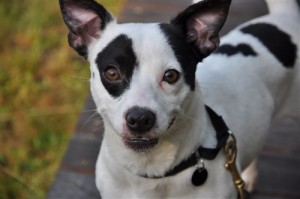 When the medical team came to take their father away they asked the neighbors if there was someone to care for the dogs. They were told no. What happened then is mind-boggling to any of us who loves dogs: they opened the door, let them out on the street, closed the door and drove off. I can only hope and pray the dog’s dad wasn’t conscious of anything that was going on. Peety, Darla and their third companion gal jack fended for themselves for a month on the streets until a kind Samaritan found them. A little worse for wear, Peety’s ear is still scabbed over; they were taken into “custody”. The shelter kindly had them spayed and neutered for us, but during her spay the third little girl passed. From what the vet told my vet it appears she was probably hit by a car, and even though she survived that accident her internal organs were shoved up into her chest cavity and when she was open to be spayed, she passed.

The good news is she was truly loved and adored up to the very last minutes. Thank you Suzi from the shelter who showed extreme love and care for all three pups. So Darla and Peety have made their way to Jacks Galore to find their forever home. (We did make sure Suzi from the shelter found their dad and told him they’re safe and loved once again.) What’s most exciting about this story is that the day after they arrived with us Peety was adopted. Probably one of our quickest turnarounds. Peety and Darla are good friends but we found they will do just fine alone as well, and considering the wonderful home Peety got he will settle in quickly and the love that will shower him once again will give him back his soul.

Darla, still looking for her new home, is an amazing little girl to watch play with her ball. It’s not so much for the chase but that she races around with it, throws it in the air, plays with it, catches it, runs with it – all by herself. She loves to play with other dogs but plays tough, although with much kindness. Darla has been bred quite a bit, and despite her young age she looks a little “droopy”. Darla is beautifully housetrained, does well in a crate, is very affectionate and quiet, and walks delightfully on the leash. Evidently very much loved by her previous owner, it gives us great pleasure to know that just like Peety she too will get a wonderful forever home. 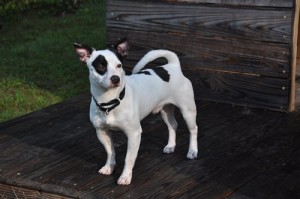 What’s not to like about her? Her compact size and love of other dogs and all people will make Darla a great catch. There’s nothing about this little girl that’s not to like. Don’t let her wait too long: come and show her that her next home will be forever. 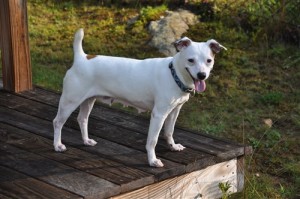