Oreo came to Jacks Galore via a wonderful couple who adopted from us before. They alerted us that a jack was to be put to sleep because he had such extreme separation anxiety and the family was at its wits end with his biting or going after you when you left or put him in a crate. JG was asked to intervene. Their vet said he thought the dog was not trainable.

The night before he was to lose his life JG determined to give Oreo a chance at being a jack and on the afternoon of that next day we brought Oreo to the Berkshires to start his first step towards rehabilitation. 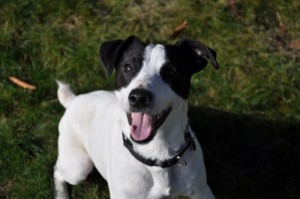 This is another example of kind people wanting a dog, falling in love with a puppy, but not researching the breed. Many people underestimate what a puppy requires of them, let alone a jack russell. This is also a warning why one should not buy a puppy from a pet store, whose character is unknown and whose life’s beginning may have been less than ideal. We encourage people time and time again to please DO NOT buy a puppy or dog from a pet store. These are outlets for the puppy mills all across the Unites Sates; Oreo came to MA from Arkansas.

A lovely, kind, gentle dog, Oreo does have extreme separation anxiety, and has no clue what taking a walk is. But Oreo, so aptly named, DOES know what playing ball is and after a few runs around the field brings it back and tosses it at your feet for the next throw.

He was taken to the vet the day after he arrived to be neutered and brought up to date on his shots and of course microchipped. He is now healed and enjoying playing like a madman in the field and taking walking lessons with JG. The first day Oreo only bounced up and down at our sides, heeled perfectly but bouncing nonstop for the first walk. Every day we make progress and a week after arrival Oreo managed to do a whole mile walking with all four feet on the ground. Progress.

Oreo will be heading to NJ for a week with a marvelous jack russell trainer at Behavior Plus. Frank Pugliese knows this breed better than most, a kind no-nonsense positive reinforcement trainer who has helped many jack adopters work through the small issues they might have had with their new family member. And even some tough jack customers have found their peace after Frank met their JRTs. So Oreo is on his way to making someone a marvelous dog, but a jack that NEEDS a lot of mental and physical activity.

Oreo needs to be a jack. His progress to be continued 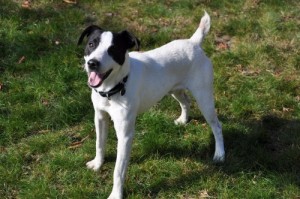