Max came to Jacks Galore to find a new home. A six-year-old all white puddin’ Jack with some brown on his ears, was no longer able to stay in his home due to his people aggression and anxiety. But not the sort of aggression you’d imagine, but fear aggression of new people and extreme activity surrounding him.

Max was bought as a puppy but unfortunately went into the wrong home and did not benefit from a loving beginning and suffered from some obvious abuse. So when he turned two and needed to find a new home for not fitting in, a family took him into their care hoping that they would be able to offer him a forever home. Here Max was surrounded with people who loved him, an elderly gentleman who would take him on long walks, and an extended family who kept him busy.

But then the unthinkable happened and his “dad” developed Alzheimer’s and then on top of that Parkinsons and required round-the-clock care from not only his wife who left work, but also a myriad of caretakers. In the meantime an infant joined the family, and Maxeroo as he was called, was loved and played with.  But soon less and less time was able to be spent with him, and with his fear of the caretakers coming in and out he was relegated to a crate for most of the day and didn’t get out like he should; got frustrated, became aggressive, and ended up not being able to deal with his life’s new routine. So Jacks Galore was asked to step in and see if we could rehome or retrain him. 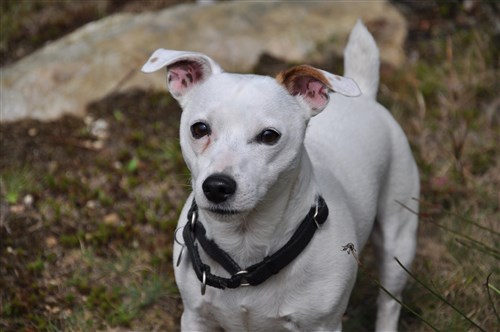 New people are not Max’s cup of tea

We were skeptical, but we did know that he would not survive in the shelter system. When Max arrived and his owner stepped out of the car and I walked up to them, Max decided I was something better to be eaten! So Max was placed in the kennels by his owners, a new collar put on by them and goodbyes were said. Day one, day two, and still on day three Max would not let me near him, I could not even go in and sit with him he was so angry. Then day four I knew that it was sink or swim, so I went to the kennel door, I took a leash, knelt down and opened the door and as he walked towards the door just hooked him up. Off we went for a nice long walk, and some serious bonding. Max is now my very best friend, and I can do anything with him. He is loving, adoring, and is a great kisser. It took him a few more days to trust the Jacks Galore man of the house, but soon he came around and Howard and Max are best buds. Max got along with several females that we had in the kennels, and ended up rooming with Mabe and Lovey, but was slowly deteriorating in the kennel situation and became more and more hysterical, barrier aggressive and anxiety ridden when he was placed back in the kennels when the door closed after a long walk.

Several people came to meet Max, savvy Jack people who were willing to give it a try, but several trials to see if he would warm up to them within a few hours, putting him in a crate, walking away to see if the people were able to get near the crate to get him out once they got home, sitting quietly and allowing Max to settle – all proved fruitless, and we were back at square one. There were not many options left for Max, and not wanting him at the young age of six to spend his life in the kennels with his anguish over the barriers; with trepidation we decided to see if he would make it work in the sanctuary pack. He did not seem particularly great with other dogs in the kennels; he appeared to be a picky and tough dog mate, so we were quite worried that some of the more pushy sanctuary jacks would put him over the edge. 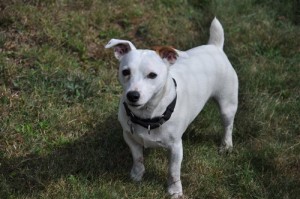 Does love a good game of catch

We started on the agility field and brought several of the fabulous bombproof jacks from the sanctuary up to meet him, and with some initial posturing he actually seemed quite submissive when the dogs wanted to play or appeared too friendly. He took correction well from the dogs and us, and once there were four with him in the field, he paid no heed. So now the big test, would Max survive with the multitude of sanctuary jacks in an environment where it sometimes can get pretty busy and barky? We then proceeded through our usual meet and greet testing, one dog at a time until he had a slew of jacks running around the backyard.  Then we opened up the fences and off all the jacks bounded for our 6 acre loop of the property with all jacks racing and running. Half of them didn’t even notice Max was there, everyone was having such a good time slaloming between the trees and looking for chipmunks; Max among them. Every few minutes someone would recognize a new dog, and Max would be greeted with a quick hi and then everyone would run off again to look for a possible squirrel in the leaves. Then we walked into the house, he ran through the dog door with everybody else and no one seemed to noticed four more paws.

Welcome home Max, you are now officially a JG sanctuary jack, and will remain with Jacks Galore with the rest of the forever crew until your time comes to join the others over the bridge. Max, our newest sanctuary Jack;  sleeping with us in bed, relaxing on one of the Jacks Galore desk beds or lounging in the sun with the other dogs. He gets it. He’s home. No unhappy endings for Max.