It is rare to be so humbled by a gift from a donor unknown to us, whose love of the Jack Russell Terrier assured that Jacks were in his will. By chance his dear friend Barbara, also a JRT lover and owner, learned of us and proposed we be part of his gifting. It thus happened that Dick, his executor and friend of more than 30 years, made sure Jacks Galore was the recipient of a generous donation by The Daniel Edward Offutt III Charitable Trust of Weston, Connecticut.  The donor, Dan Offutt, passed away at 85 following an illness.

Dan would have described himself as a “farmer” but he was much more. Those who knew him remember him (in no particular order) as a tennis player, traveler, sailor, metal sculptor, wood worker, fixer of anything, collector of everything, lover of projects, stock market investor, and good friend. A favorite expression of Dan’s was, “I’ve never met a successful pessimist.” 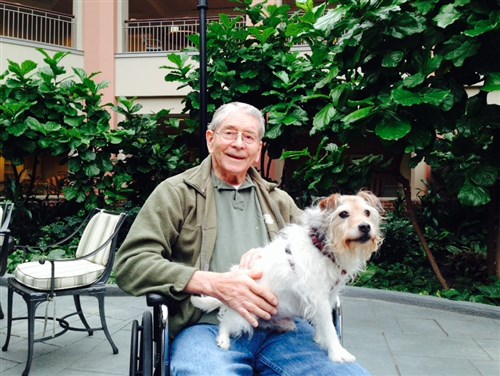 Dan and Bandit in their last year together

Dan lived for his last 30 plus years in Weston, Connecticut. Born in Oakland, Maryland in 1931, he attended the Hun School and the Lawrenceville School, both in Princeton, New Jersey. He served in the army until 1956. He graduated from the University of Maryland and received an MBA from Columbia University in 1965. His career was as a stock trader, mostly for his own account and then at EF Hutton & Co., from which he retired to move to Weston.

Always a Jack lover, some of his friendships came about because of his Jacks.  His last one to grace his life was Bandit, “adopted” into Barbara’s family with her Jack when Dan entered a nursing home due to illness.  During Bandit’s regular visits to Dan, he was able to enjoy the love of his dog as his health declined. 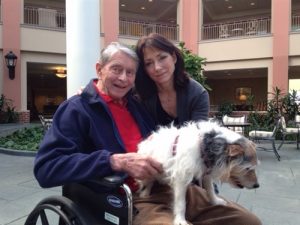 Bandit crossed the bridge shortly before Dan on July 4th at 14 years of age, and breaking the news to him was one of the hardest things Barbara had to do.  Dan died on Thanksgiving Day the same year after his beloved terrier, and we are sure they’re now walking the fields together again.

We are told by his dear friends Barbara and Dick that his Jack Russells meant the world to him, and we here at Jacks Galore are proud to let his legacy continue in our work to keep finding marvelous Jack Russell forever homes with Dick’s help and Dan’s bequest. 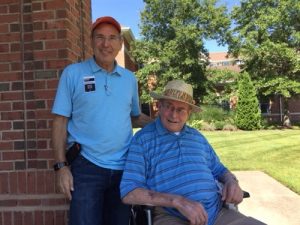 Thank you Daniel Offutt from the bottom of our hearts; your legacy will make a difference in the life of many a small terrier.