ADPOTED!!!!  Off to the eastern part of MA; JW went off to a life with his retired dad, a wee dog pal, and lots and lots of walks.  He will get to explore not only the neighborhood but the beach boardwalk as well, and maybe even a dog park or two are in the future.  Lots of lazy days ahead spent being adored, sunning in the yard and enjoying the company of his humans all the while.  JW will reward his new fur family with more than just affection , he will show them THIS jack is a winner all around.  Happy days ahead for JW, who from now on will only know kindness.

A proper and very kind long-legged jack, John Wayne (JW) is a 5 year old black and white smooth-coated male (what else with a name like John Wayne?) who at his fit level should be about 18 pounds.  Like so many jacks coming into rescue looking for their forever home, JW is a few pounds overweight and needs to lose some of his excess weight to be healthy and live the long jack life he deserves. 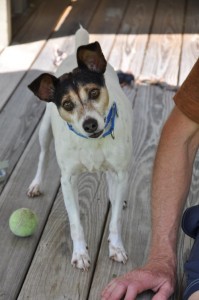 JW is the kindest jack, a people magnet; he just draws the humans to him with his exuberant tail wag, his smiling face and his deep dark eyes.  JW gets along with all dogs, he likes to run with them and play when he can.  Ideally though, he enjoys a long stroll with his person, perhaps a ball toss too.  He might need a refresher course in housetraining as he was in a farm foster situation for quite a long time. 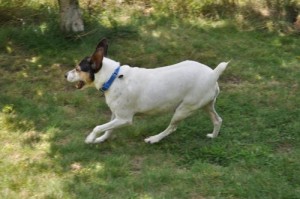 Loves to have a good run

JW came to us when the person who pulled him from the shelter asked us to step in as he had been at his foster farm since 2011.  Jacks Galore is not sure why this young jack was never adopted, why he was overlooked; it seems the foster simply never had the ability to find him a home and he was just living with a pack of dogs.

He is very good in a crate, rides lovely in a car watching the scenery or taking a snooze, and at the vet he’s a wiggly happy dog seeking all those warm hugs and head pats he finds so rewarding.  It’s obvious to us that JW truly wants to be a dog who gives to his person in an extraordinary way, a jack who just longs to be noticed, to tell the world he’s such a handsome fellow and ever so sweet.

He deserves knowing a warm bed and a sofa to snuggle on. Would that be with you? 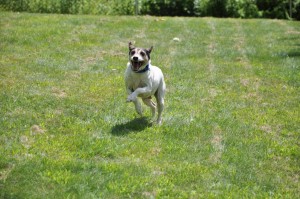