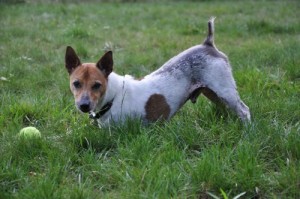 Otis loves the ball, and life

Otis is a Jacks Galore dog who came to us from Russell Rescue in VA a few years ago. At the time the marvelous VA rescue rep was working with us to place and save a lot of jacks, but one at her end stood out in her mind and we were asked to step in and help.

He had been abandoned, and as a stray had been on the road for a long long time. Flea-infested with infected skin, Otis was saved by this great rescue group. A charming face with a battered body and a personality matching the sun, we were sure he would be adopted quickly and agreed to take him in. Otis thus came to start his new adventure.

Sadly, as time wore on this petite guy attracted no interest, even from homes well-suited to this amazing jack: extremely clean, gentle, calm, lover of all dogs and people, obedient, smart and quiet – NOTHING failed this perfect jack except……his skin. Nothing much to look at perhaps in many an adopter’s eyes, but we saw so much more in his soul. So after a long time holding while others came and went, Otis stepped into the JG clan.

He was an instant pal to all the dogs, hunting with the best of them and always proper in his manners. Otis was cleared for health by the Jacks Galore vet early on in his stay, and actually had formed a beautiful pigmenting on his bare skin. He is known to us in the house as the piggy, with his tough pigskin rear. His loss of eyelashes and dark eyeliner marking where the hair never grew back made him a unique looking if not extravagant dog.

Otis is a beautiful dog both inside and out, he lounges by the fire at night in the winter and adores the sun on his back. His dark pigmentation actually affords him more leeway than others with hair but light skin. Enough damage was done in his life that the hair will never grow back, but in the winter Otis dons his wonderful green coat that the VA rep who rescued him sent as a present for him. He is quite the star and a perfect dog.

Who could ask for more? Otis, you are our one and only. Glad the others missed out on this gem.