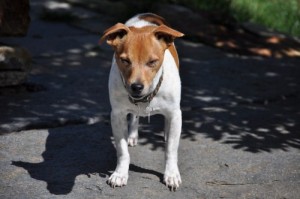 Milo, our little brown jack, has a liver shunt requiring time-consuming care that prevents many people from caring for such a dog properly. Special diet, meds two or three times a day, and close observation of his behavior (Milo is a rock eater, we’ve learned after he arrived to live out his life at Jacks Galore). He’s a wee thing, the runt of his litter and physically challenged from the day he was born.

His liver shunt might very well prevent him from living a very long JRT life; as stoic as he is about his daily food and meds routine, we will never know how long he will grace us with his delightful personality: there’s not a dog Milo doesn’t like, he wants to play with everyone, is a big tease, and can run like the wind when being chased. He knows the word snuggle and seems to find the crux of an arm in bed at night the most comforting thing one can give him. He’s the perfect easy dog, at a mere 7 pounds.

When Milo first arrived into our home he was doing great and then a few weeks later stopped eating. We panicked at the thought we had already reached the end of our loving him but he is a rock eater and in his previous home he swallowed a rock so big I’m not sure how he even got it down his throat. The good news was it was not from our land, BUT the bad news is he likes to eat the pea gravel we have throughout the area so when we clean up we notice his taste for rocks. We have some rock chewers but now we have two rock eaters. One surgery under our belt to get out rocks, we are now extra cautious as to where he goes alone without our watchful eye, he can only manage so many surgeries before his liver can not handle the drugs. So extreme caution is called for and we hope we will not have another rock emergency again. Another quirk some dogs have.

Milo is not available for adoption.  He is a Jacks Galore Terrier.