Merlin came to us from Russell Refuge many years ago. After being given up twice he landed lucky with Jacks Galore who gladly tolerate his quirks and idiosyncrasies. Merlin is a major marker (pee bands are best for your dog if this is a habit you’re unable to break, no need to give up your dog because of this. Plenty of belly bands on the market), but aside from this oh so annoying habit, Merlin is a marvel.

When he first came to Jacks Galore he was a ball fanatic, the ball was his security blanket, for the first month he lived with us he played ball nonstop. We were worried that perhaps we wouldn’t be able to keep up with his ball craziness, but slowly over the years Merlin’s ball playing has become predictable and now as he has reached 13 he has to play ball whenever we are at a table eating and when we are in the mudroom preparing dog dinners. It is still a security blanket, but one he no longer obsesses over 24/7. Although we still can catch him with the ball in his mouth while snoozing Merlin continues to be our number one ball catcher. A dog who watches each bounce to catch perfectly every time, JG has not seen him miss many catches.

As he has aged he no longer appreciates sharing his snoozing space with other dogs and at bed time he would rather we not get into bed either!!! There we have done it: admitted that the dogs sleep with us. I know many people frown at this practice, but I dare say more people than not share their sleeping quarters with their pets. 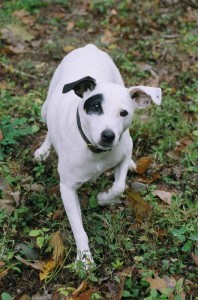 Merlin studies the ball ready for the catch – even at 13

Merlin is a kind gentle long legged smooth coat jack, from the time he lived with his first family he shared his life with multiple dogs, and each time JG has brought in another thrown away jack he is the first one we introduce. Friendly with all dogs he is the captain of kindness. Merlin also joins Fitzie when we go to schools and camps to introduce the kids to rescue dogs. Merlin loves the attention and if the students will also toss a ball for him even better.

Merlin often graces the JG desk to snooze while we work, and he makes sure he lets us know when the UPS man arrives, barking when anything moves, another trait that appeared as he ages. We are so enjoying his evolving character and to this day are not quite sure why he was never snapped up for adoption. Our gain.