Casey came to us from Russell Refuge, another unadoptable dog exhibiting health issues that nobody wanted to tackle. The unknown is always a scary thing, but Jacks Galore knew the potential this little pint size jack had.

He loved other dogs, a comrade to all who met him, so what is just one more pack member? And Casey was adorable. Found wandering on one of the Hudson bridges and picked up by animal control, he constantly had sore feet, did not want to have anyone get near his pads, limped and was so skinny no amount of food seemed to stick. A recipe for disaster? Maybe, but in the end no. 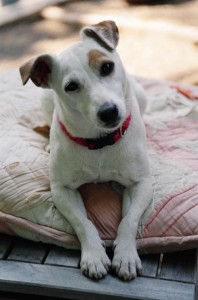 Casey’s feet soon healed and were cleared from any soreness, he even had the vet stumped but in time it resolved itself. Too much walking to find his way home? We will never know, but pain no more. His weight on the other hand proved a challenge for us until just recently, some 8 years later, when now he is actually putting on some weight. Casey used to eat the amount of a large breed dog and never could keep weight on, we did all the tests and “cures” imaginable, but in the end Casey did prove to have major gastrointestinal problems that are partly relieved by a Pepcid every morning with breakfast. On rare occasions Casey still does not eat for a few meals but then finds himself begging for anything we offer.

Casey is the true jack, a lover of all dogs until they are “down and out” then he tries to go in for the kill, such a jack temperament with Jekyll and Hyde ingrained in his being. His fellow comrades are well aware of his character and make a wide berth should someone feel down in the dumps. At perhaps 10 years of age now, Casey’s lovely eye patch has faded away and his energy level has waned, he used to go for miles and never tire; now the run around the loop satisfies his energy level, then to a comfy dog bed to rest away the hours.

Still very much a dog lover, he snuggles with one and all and is pleased when he can be close to another fur kid of the JG clan. Casey is an older JG member who we hope will still give us many more years of joy. Casey is not up for adoption, he is a JG lifer dog.