A posting on a FB page, a plea for help to save a little jack from a NJ shelter where he was languishing, unadoptable. He was fierce, cage aggressive, resource guarder, picky with other dogs, too much energy: every trait a jack russell exhibits in the shelter system, behind bars, Cooper showed it.  But he WAS adorable, so Jacks Galore decided we’d give him a chance; after all, they don’t come much cuter. 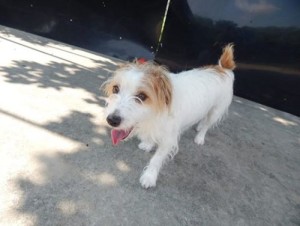 Cooper at the shelter

So with a deadline looming we called out to our volunteers, supporters and fosters and within a few days Cooper was being picked up by our dear jack trainer Frank Pugliese from Behavior Plus.  It happened he was headed down that way to teach some classes and went the extra hour drive south for us (who knew NJ was such a big state?) and picked Cooper up.  On his way to foster with Frank and Michaela he did not prove to be a great guest when he nipped his temporary mom several times in the car – what did we get ourselves into? Major training lay ahead.

Cooper landed safely in his temporary home and started to exhibit all those crazy jack signs. He was not sure he liked Bella the resident pit bull (a mush and a trainer dog), and showed the typical resource guarding of so many dogs that just get the wrong start in life.  Did Frank have his work cut out for him! 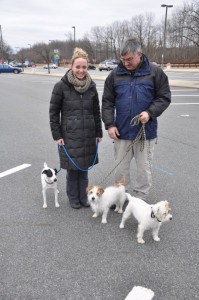 Back and forth as to when we would bring him up to us in the kennels, Frank insisted he would keep working with this super cute, adorable jack and help us make him adoptable.  We kept getting reports on how well he was improving but that we should consider taking him soon since he was a typical jack.  Cooper was improving and Frank had a full plate with his t-shirt business and dog training, their house hectic, I was reminded that Frank already had a typical jack and two other resident dogs, so we needed to think about bringing Cooper into Jacks Galore.

We worked on possible schedules, but every time we spoke about Cooper coming to us it got delayed for some reason or another, and delayed and delayed – then the truth came out: Cooper is loved, adored, and his training was going so well that maybe they would have to keep him longer.  And longer, and longer, until we realized Cooper just was not coming up to me at all – one heck of a failed foster.

Cooper now is a training guide for Frank’s classes and leads group walks with his pit bull Bella, and has turned into the most amazing jack: off leash, rock solid recall, manners, tricks, loves his resident dog pals now and is devoted to his mom and dad.  We always knew Frank was amazing with jacks, but Cooper proved it once again; with a lot of patience, time, effort and proper guidance a jack can turn around and become a wonderful companion.  You can just never give up.  Another life saved.

Thank you Frank, for your amazing help in turning around this little rough coated boy who was doomed to end his life on the other side of the bridge had we not intervened.  Thank God for people like Frank who are willing to give it all they have, and to the dogs we never give up on. 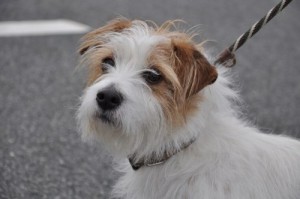