Clete, now named Clyde, went home this cold dreary November weekend to his own 200 acre farm in Vermont.  With a new mom who is a vet, to make sure he never has physical problems and able to monitor his health should he encounter arthritis as he ages, he joyfully performed his no nonsense play for his new fur parents.  With a very large German Shephard puppy as a pal, he found his bliss mouthing his new mate and showing the MASSIVE pup who can speed as well as a four legged giant.  Clyde will continue to run like the wind, for his life continues on.

Three legs does NOT slow this 5 year old rough coat wonder boy down, he runs like the wind, loves like there is no hate, and is joyous of all things fast…..the chase is the name of the game.  Clete came into rescue by sad cuircumstances, his mom took her  life, but a kind friend stepped in to make sure her dogs had a life to live.

Born with three legs, Clete has no concept of what the number four means.  If it means you can go faster well there is no speed limit now. If it means beauty, well his stature is tall and fluid so the concept is lost on him.  If it means people will not look at you, all the better missing a limb for the attention he adores.  Clete is the poster child for a dog who lives life to the fullest.  The concept of handicap is not to be found.  Dogs see no impediment to missing a limb, and being born with only three, he has no idea what four does different.  Clete loves to chase, he plays rough, barks loud and picks himself up from the wipeout.  He rolls with his roomate, slumbers in your arms and smiles at the site of open space.  He would love a forever home with a buddy to chase.  His smile is contagious, let the three legged dog run!!!!! 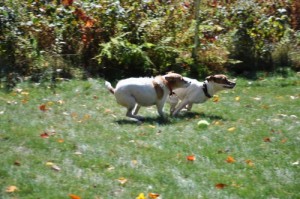