Hugh is a 4 year old brown and white 15 inch stocky 16 pound smooth coat male named for his parading around with his harem of two gal jacks.  Hugh’s partners Pearl and Daisy both have found homes and now he is alone.  He has now been at the rescue for more than a year.  Currently the longest of any jack we have.

Saved by a show barn owner whose equine vet came to the rescue, the original three came to Jacks Galore to find the home they so deserve.  Hugh loves his girl pals and is a hunter of the highest order.  Hugh is free spirited and active.  A fenced yard is an absolute must for this dog, but not just any fence, a bomb proof jack fence or he WILL get out, so strong is this jack’s hunting drive.  He would thrive at a farm or stable with acreage and a heated tack room or office where he could sleep and rest and be out all day enjoying the hunt.  Hugh is loyal to a T, and wants to be with his people.  Hugh also likes to chase the ball, play with his gal pals, and is a definitely a schmoozer with his people; very affectionate!!!!

Hugh is a powerful young man, racing when he has the zoomies after the ball, faster than a cheetah and as graceful when in full tilt.  A gentle snuggler, he’s quiet and calm and knows how to show his affection for all humans.  Attentive and kind, he rides well in the car, is crate trained, walks fabulously on a leash (be ready for those 5 mile walks) but is not fully housetrained, but that is what belly bands are for.  It should not take long, he is one smart jack, and obedient. 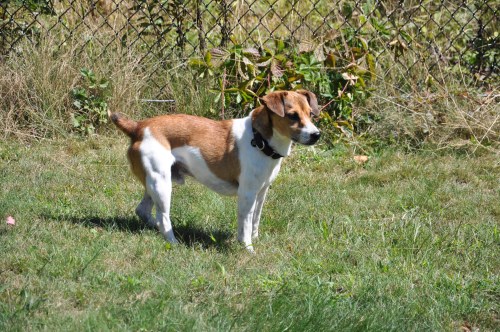 This jack is not only handsome but amazing in character, what a joy to watch him in motion, what comfort when he comes to show his affection, and how happy he seems as they races free in the fields.  A very special package of a hunting jack; come and be won over!!