As Jersey above demonstrates the slumbering moves of an older dog, at 11 he is atuned to the rhythms of his body slowing down, just like Jacks Galore elder statesman Fitzie who is a 19 year old free spirit.  Ever the calm, quiet man around the house Fitzie came to us because he was no longer able to stay in his home due to his perceived incontinence.  Joining our pack just three years ago he has proven to be a model of cleanliness.  We hope that he will grace our pack for a few more years, but he is the senior of the bunch so we know it will not be long as his days fade to twilight.

Senior dogs, like Fitzie and Jersey of  the JG clan come with a quiet serenity that is most satisfying.  Adopting an adult dog can have rewards of its own.  The dog tends to be calmer, although with a jack, physical activity is still a very much required past time.  They most likely only need a refresher course when it comes to housetraining and need to get to know your schedule like any new member. They tend NOT to chew everything that you leave behind, and they can adapt as well as younger dogs to their new surrounding if given guidance and patience.  Jacks Galore has adopted many mature jacks over the years and each one has brought a certain joy of knowing you can allow them to live out their lives with much love, attention and caring. 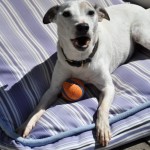 Currently the JG pack is graced by several 11, 12 and 13 year olds and then our 19 year old Fitzie.  Most of them still quite healthy except for the occasional arthritis, who does not get that as they age, and some minor ailments that are treatable with the proper medications. Jackee has Cushings but he is doing so well on his Trilostane medication, his last blood work showing values of a much younger jack.  A little tilt to his back end and some increased liquid intake is all that tells us Jackee has a minor age related health issue.  Gabby sleeps most of the day, and can often be found curled up in a dog bed in the sun, another older dog trait, lots of sleeping and ……. the accompanying snoring!!!  Teddie shows no sign of aging and still hunts all day outside, and even the winter months do not deter this 12 year old jack from searching for those critters that might have escaped his keen eye on another day.  The other elders show us no sign of slowing down and we can only sometime marvel as we humans wish that we could have their energy as we age. 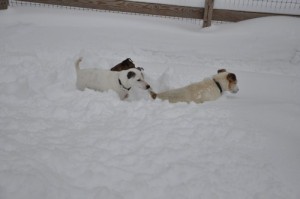 I say enjoy the older dog, adopt the elderly, too many people pass up the opportunity to give hope to one that has been discarded in old age.  They can still give us so much love and enjoyment, and most often still have many years left to show us the rewards of the quiet soul. We too age, ask how you would feel if your family left you behind.